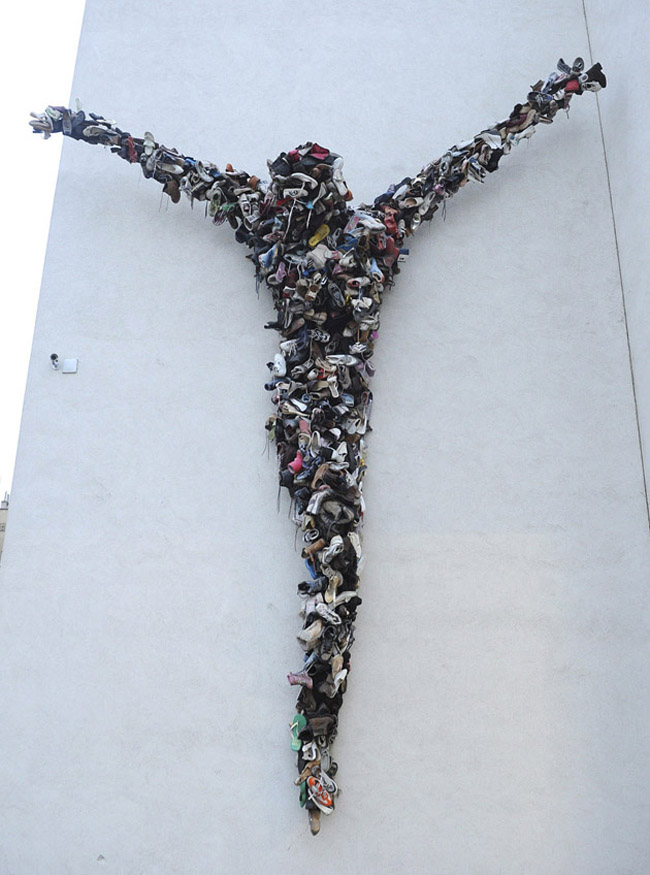 Continuing with the shoe theme (see previous post) this sculpture titled Shoe Christ: Compulsion to Refuse Something that Has Been Used is made by Czech artist Petr Motycka using approximately 1444 used shoes and sneakers. Measuring more than 6 meters high and weighing over 500kg, Shoe Christ was originally created for a public space on Prague’s riverside (see bottom photo) where it was shown last year. More recently, it was modified and displayed at the DOX Centre for Contemporary Art where it has been since the end of last January.

From the artist:
Shoes can be a vehicle of social status. The simple fact of „owning“ shoes once signified belonging to a higher social class. Contemporary shoes can signify the bearer’s cultural affinity…

The fact that the sculpture is made of shoes that had been used is very important. 1444 worn shoes means that more than 1400 people and their stories are part of the Shoe Christ. Used things and especially shoes often evoke repulsion. There are not many people who buy second hand shoes, who want to wear shoes that have been worn by someone else. Shoes are a very personal property.

Shoes have become consumer goods and through their quantity and signifiers contribute to the overall image of consumer culture. Our cultural values and concepts increase their worth by being used. On the contrary, things produced by the same culture, lose their value the more used they are. We require pure matter and used ideas…

via this isn’t happiness