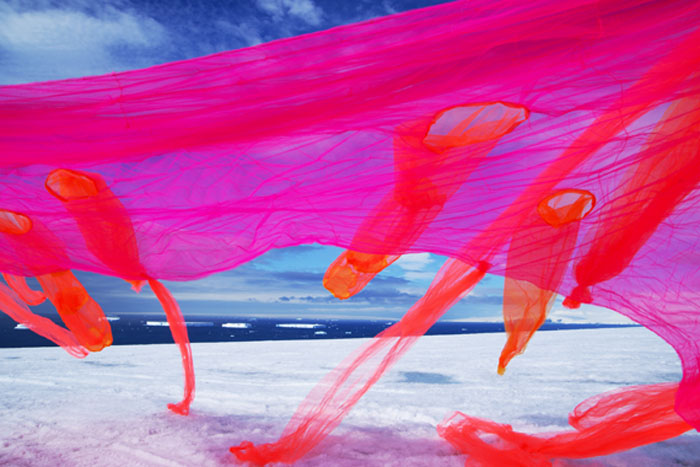 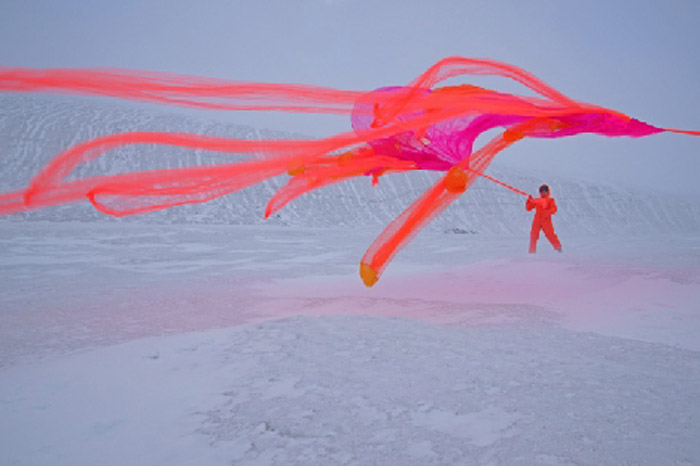 Argentinean artist Andrea Juan works with photography, digital video and installations. Since 2004 her work has revolved around Antarctica and scientific research related to climate change. She has used the ice-fields both as a screen for slide projections of the contrasting warm and sunny sunflowers from the northern Argentina that eventually convert to flames and burn out as a warning to the viewer, and, more recently, as the backdrop for her bright-colored fabric installations and performances.

Her latest series of photographs are titled New Species and New Eden, both of which are on view at Praxis gallery here in NYC.

Following the meltdown of ice shelves which caused important changes in glaciers in the Antarctic Peninsula, an extraordinary wealth of new specimens has been found. An unknown world of possibilities and new life has emerged and it is the core of the series New Species (2011). The striking images depict the newly discovered ecosystem that had remained unnoticed under the ice in playful scenes where gleaming shapes take over the immeasurable setting.

This series also sparked the latest site-specific project which is titled New Eden (2012). This performance/installation took place in Antarctica last January and February. Large pieces of mesh in neon colors flow over large expanses of ice without touching the ground.  The translucent material casts diaphanous shadows on highly reflective areas which become covered with pink and orange light. Like soft and delicate living organisms, the sheer net moves between the shapes of ice blocks in the land and clouds in the sky, while changing the perception of an otherwise frosty landscape.

There’s a Christo quality to these latest installations that I love. The whiteness of the snow and ice as a canvas makes these spectacularly bright colors and shapes all the more dramatic.

Photos courtesy of the artist; Praxis; and artnet