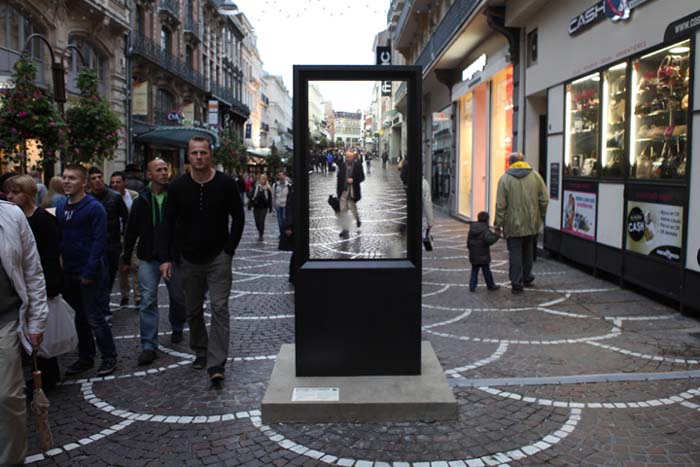 French artist Thierry Fournier works in digital media, video, performance and installation art. His work explores the physical vs. perception bringing together commonly dissociated space-times such as fiction and reality, living and non-living, interior and exterior.

In his installation A+ (also titled See You in English) which most recently was exhibited on a street in Lille as part of its Fantastic Festival — which ran from last October up until yesterday — Fournier placed a video screen displaying the street that continued on the other side of the framed screen, as if looking through a window except that the video being shown had a constant 24 hour delay. This confusing image had pedestrians stopping, trying to figure out what, in fact, they were watching, while at the same time being filmed themselves. As the artist describes it: “Two temporalities into the same perspective creates a ‘temporal depth’.” Those who pass in the image and those who observe them coexist without ever communicating. Very trippy…

You can see it in action here.

Photos courtesy of the artist.