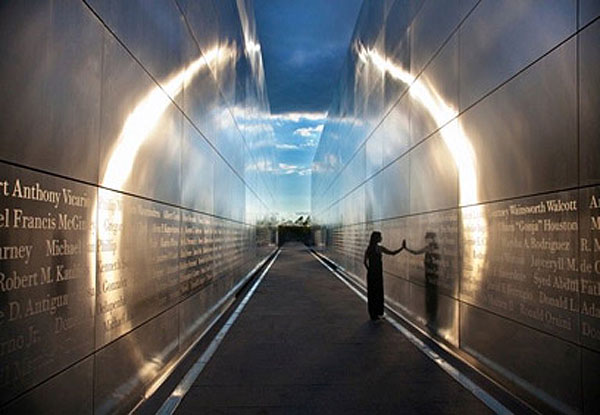 Though I haven’t yet visited the 9/11 Memorial down at the World Trade Center, it has been so thoroughly documented that I am not only aware of its existence, but also have a reasonably good idea of what to expect when I do finally go in person. The same cannot be said of the New Jersey memorial, Empty Sky, on the other side of the Hudson River, honoring the 744 victims from New Jersey who lost their lives at the Twin Towers on September 11th, 2001. That is until now, that I’ve come across its existence.

This simple yet striking memorial, designed by Frederic Schwartz Architects, consists of twin cement and stainless steel walls, 12 feet apart, 30 feet high and 210 feet long, that reflect the changing light of day creating a halo effect at dusk and dawn as the sun hits the parallel walls. The corridor created by these two walls dramatically draws the eye to the vacant (empty) space where the towers once stood. Working with graphic designer Alexander Isley, it was decided to engrave the names of the victims in ITC Bodoni 12 in a larger size than is usual in memorials, using a cap height of 3.6 inches, spacing the names out so that none of them are broken, and allowing for the families of the victims to easily create rubbings of their names, if they so choose. Other consultants on the project include Ove Arup & Partners Structural Engineers and Arnold Associates as the landscape architects.

The project was unveiled this past September. I’ll have to pay a visit to this memorial in addition to the inverted fountains downtown.