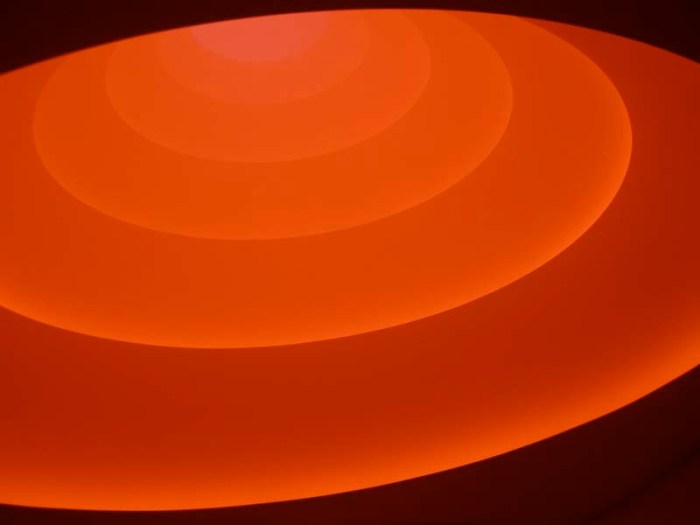 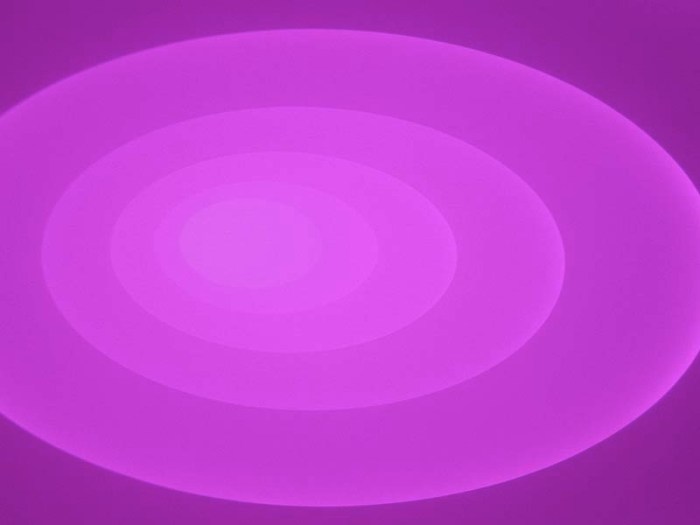 The very much anticipated James Turrell exhibit at the Guggenheim opened this evening and we were fortunate enough to attend the exciting event. The impressive skyspace installation that occupies the seemingly reduced-in-size rotunda does not disappoint. Aten Reign, as the massive installation is titled, cycles through a spectrum of colors—with varying hues of each—in approximately an hour. From white light to deep shades of reds and purples and eventually to almost complete darkness, the central atrium of the museum glows in a mystical yet soothing array of colors, changing people’s skin tones and even playing with one’s eyes and perception of color in the exterior halls lit in their natural white light that seem to take on a pink glow when the rotunda glows green, and green when pink. The rest of the museum is virtually empty except for about 5 rooms containing older works by Turrell all in white light. The trickery in these works is amazing, causing one to doubt their depth perception on a consistent basis. That which seems flat, is actually an open space, and that which seems open is actually a flat wall with projected light. Same goes for a cube of light that is so convincingly 3-dimensional, when in fact it is completely 2-dimensional. But, back to Aten Reign the exhibit’s pièce de resistance: the multi-tiered scrim creates elliptical circle within elliptical circle, working its way up from the most intense shade to five shades lighter towards to skylight. The rest of the museum looks oddly cropped and bare sans art, but it makes you appreciate the James Turrell installation-filled rooms, all the more.

James Turrell will be on exhibit at the Guggenheim through September 25, 2013.

2 thoughts on “James Turrell: Aten Reign in the Guggenheim Rotunda”