Autone is a Polish graffiti artist who paints very detailed murals that, to me, almost have a Northwest American Indian influence to them, but then, maybe that’s just me.

You can see his process in the video below. I like the way he stands back every once in a while to, understandably, look at what he’s done so far. It’s especially cute due to the sped-up quality of the video.

You can see more of Autone’s work here and here.

Interesting video for the song “Bizness” from their second album Whokill.

The Clover Lamp can be used as a floor, table, or suspension lamp, indoor or outdoor. It’s made of matte white lacquered aluminum and colored plexiglass.I think I like the blues the best.

Designed by Miriam Mirri for Bysteel.

Not since the Blue Men have I seen such great use of tubes. Sebastien Wierinck (whose Panels02 Chair we posted about previously) is a designer based in Marseille, France. He has designed everything from domestic furniture to commercial, interior design to stage and exhibit design. Above are some of his installations for public spaces, restaurants, galleries and art festivals.

Apart from being fun and amazing, these constructions are made of polyethylene plastic (plastic bottle waste) so it’s recycling at its finest. The tubes, usually used for water, gas and electrical distribution, are strong, flexible and readily available in multiple colors and sizes. It’s win-win all the way.

You can visit Sebastien Wierinck’s site for more info, and there are more photos on flickr.

I have had my eye on these plates for a couple of years now. Since first seeing them, I have considered ordering them online every time I’ve had a party, or group get-together, then backed away when realizing that the express shipping necessary due to my last minute ordering (not very good about planning ahead) would be hard to justify. Last week, however, on a lovely stroll to Noho here in NYC, I discovered that they sell them at The Future Perfect. Very exciting news for me. The plates are a little smaller than I imagined (though the measurements are accurate on the site) but just as beautiful.

Designed in Japan by Shinichiro Ogata, WASARA tableware is compostable and made from 100% tree-free renewable materials, so not only will your table look great, but it’s all very green, too.

Diego Grandi’s Buon Weekend was another installation at Interni’s Mutant Architecture and Design show in Milan last month. The term ‘mutant’ here referring to flexibility, adaptability and mobility. Four large colored sheets wrapped around a tree create the centerpiece of the installation as a tent that welcomes relaxation and lingering. The floral-like plates create an artificial landscape and a new take on the picnic with dishes and silverware becoming part of the informal setting. It’s no suprise that Sambonet and Rosenthal (an Italian/German manufacturer of tabletop accessories) was the sponsor of the installation. 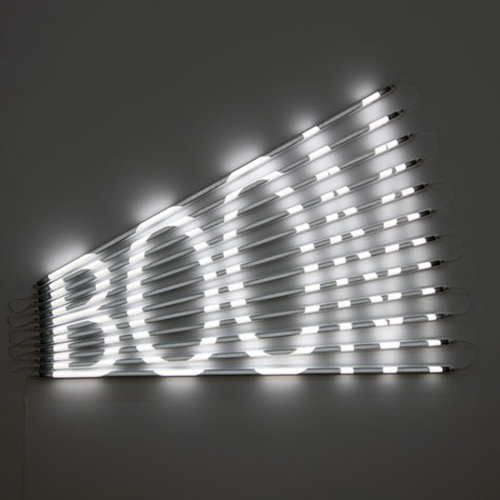 I just came across James Clar’s work. After reading this Dubai-based American artist’s bio, it seems that I’m a bit late to the party with exhibits at The New Museum, Chelsea Museum, Chanel Mobile Art Exhibit in Tokyo, and many more under his belt. I found every piece showcased on Traffic’s site  interesting. There’s a lot of play with light and technology, but also very powerful statements with strong anti-war and political criticism undertones, well, maybe not so “under”, maybe more in-your-face, in a good way. This from the site:

While his early work dealt with analyzing how technology and media work, a move to the Middle East in 2007 has seen his focus shift to how technology and media affect. As an American living in Dubai, his art work has progressed towards deeper conceptual themes. These include nationalism, globalism, and popular culture in the age of mass information, and often analyses the discrepancy in information between Western media and Middle Eastern media along with its effects on people.

Briefly, a few captions from some of these works:

Friendly Fire (2nd row, right): A small soldier sits on a rotating platform in a mirror box. His motion is nervous as he constantly spins trying to find a target while only aiming at himself.

The Difference Between Me and You (3rd row, right): Two TV screens face each other, one playing Fox News and the other Al Jazeera. In between them is a diffused piece of acrylic that takes the light from the two screens and mixes them together.

Pop Culture (bottom left): a gun that James Clar, an American, and Rami Farook, an Emirati, took to the desert, fired, and then cast in candy.

There are many more works with interesting captions here. It’s worth a look if you like the small sampling in this post. 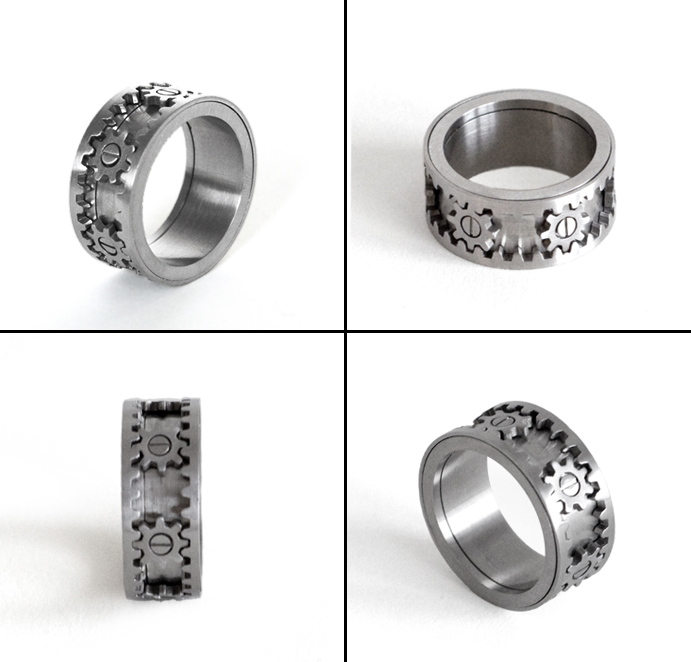 Made of matte stainless steel, the Gear Ring, designed by Kinekt, has tiny gears that spin when the outer rims are turned. Very cool. I would imagine it would be hard to resist fiddling with it all the time!

Take a look at the video to see it in action:

The Gear Ring is available through the Kinekt website.

I spotted an interesting lamp prototype made of plastic clothespins a couple of days ago in Williamsburg. Trying to find it online proved to be futile, but instead, I came across some very creative uses both for clothespins and inspired by clothespins. Here are some of the ones that stood out. 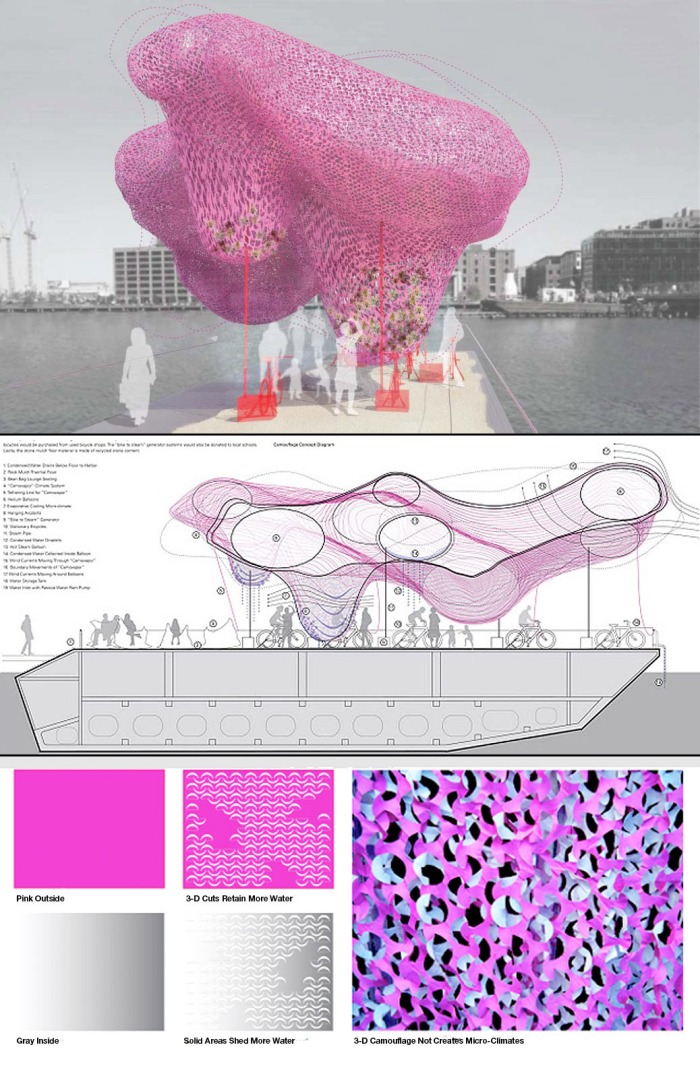 Lighter Than Air, by Rachely Rotem Studio and Phu Hoang Office, is the winning entry for SHIFTboston’s Barge 2011 Competition and scheduled to be unveiled on Boston’s waterfront as a “pop-up” public space in September 2012.

Comprised of bright pink camouflage netting, helium balloons, and stationery bikes, the “camovapor” climate system (as the designers like to call it) will float over the barge with the interactive help of visitors who can generate power by pedaling the bikes that will inflate additional weather balloons, transforming water to vapor. As the vapor condenses on the pink nets, the 3D perforations will hold the water which then, combined with the natural harbor breeze, will create a cool area and an “interactive atmospheric phenomenon.”

Looks like a trip to Boston that fall will be in order. 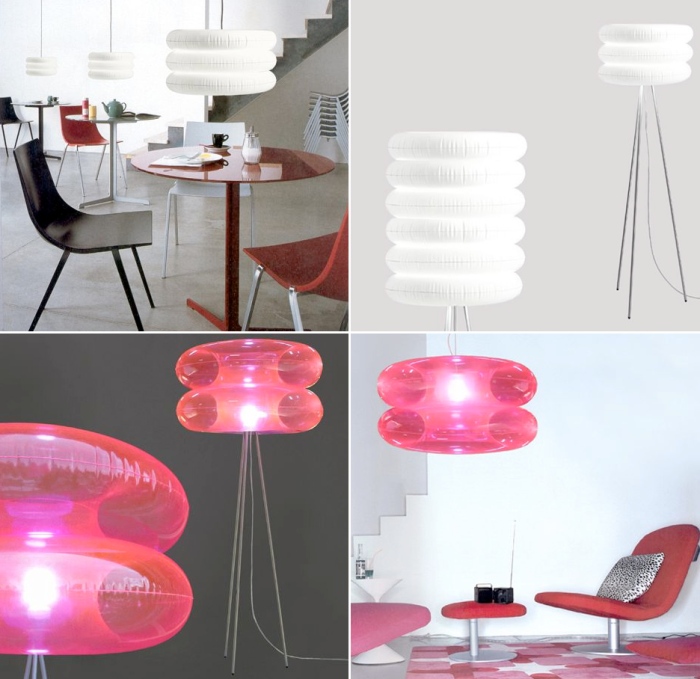 I had to smile when I came across these Puff Buff lamps. So fun, and something I would have loved to have in my room as a teen to go with my yellow shag rug. They remind me of those inflatable chairs which, by the way, I had always envisioned on the aforementioned rug as well.

Made of PVC and inflatable, these lamps come in hanging, floor, table, and column variations. See them all here and some are available here.

We had been eagerly awaiting this exhibit (see previous post) and headed uptown yesterday to check it out. The Transfinite, an interactive installation by Ryoji Ikeda (Japan’s leading electronic composer and visual artist),  is not only very cool, but surprisingly, an incredibly soothing experience. One would think that the test pattern visuals along with the loud electronic sounds and strobes might have the opposite effect but, at least for us, and seemingly, those around us, it was almost hypnotically relaxing. People were lying on the floor for long stretches completely entranced by the spectacle and immersed in the moment.

It is important to note that the show is made up of three parts: test pattern; data.tron; and data.scan. We almost missed the two data sections which were on the other side of the test pattern wall. Below are some short videos to get a sense of the show, but it definitely is more one of those you-had-to-be-there situations.

Just to clarify, Em and Dan’s chatter in that last clip is not part of Ikeda’s soundtrack… If you have sound issues with the video clips, try watching full-screen.

The Transfinite is at the Park Avenue Armory in NYC through June 11, 2011. The admission is a bit pricey at $12, but if you stay a while and take it all in, we think (though it would be more palatable at half the price) it’s still worth it.

Makoto Azuma,  a Japanese botanic artist, has joined up with Herman Miller to create an Aeron Chair covered in AstroTurf to be displayed this summer at the new Herman Miller store in Tokyo.

I’ve never been one to enjoy sitting blanketless on the grass, but this does look pretty cool.

Next time you’re at the mailbox on the verge of throwing out all that junk mail, think again. Sandhi Schimmel Gold definitely does. Having studied mosaics overseas, Gold applied her knowledge to these works. By joining her disciplines of painting and mosaic with her belief in “utilizing resources that would otherwise go to waste” she has created this series of collages since 2006 which have been exhibited in shows with titles such as “Manipulated Mail” and “Recycled Art”.

via aol news and illusion scene 360 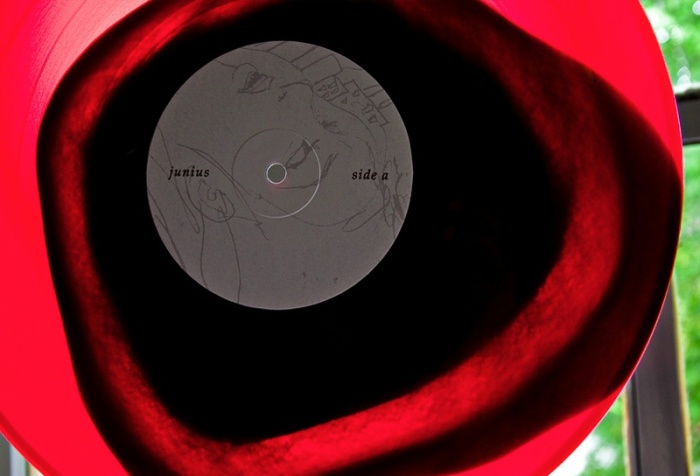 After a little googling, I discovered that colored records go back to some of the first records ever issued. In fact, the first wax records were yellow; I remember being fascinated by one that my mother owned when I was a child. Later, some 78s that were printed in multicolor swirls or splashes such as this one from 1923.

In the past ten years or so we’ve witnessed a resurgence of vinyl records, many of these seen as collectibles and possibly a good way for a small band to get visibility. Whatever the reason, I, for one, am enjoying their comeback from a design standpoint. Some of these artistically abstract colored vinyl records, from Brain Stowell’s flickr stream, are quite beautiful. More here.

If you happen to be in Madrid and waiting for the light to change at a street corner, you might want to look up and check the closest traffic light for a Tirita Maldita (Damned Band-Aid). Popping up periodically around the Spanish capital are these, sometimes humorous/sometimes political, typed messages on band-aids; one could call them “band-aid tweets.” I like the concept, almost like having someone whisper in your ear at the light. And the thought of the artist inserting band-aids in an old typewriter to create these, well, it makes me smile.

I’ve translated them into English (in white type on the photos) for those who don’t speak Spanish. Click on the images to see larger.

Vivian Chiu of Inception Chair fame, wrote us a nice email which included a link to another one of her chairs not on her site just yet, called the Limbo Chair. Another amazing feat by this very talented young designer. 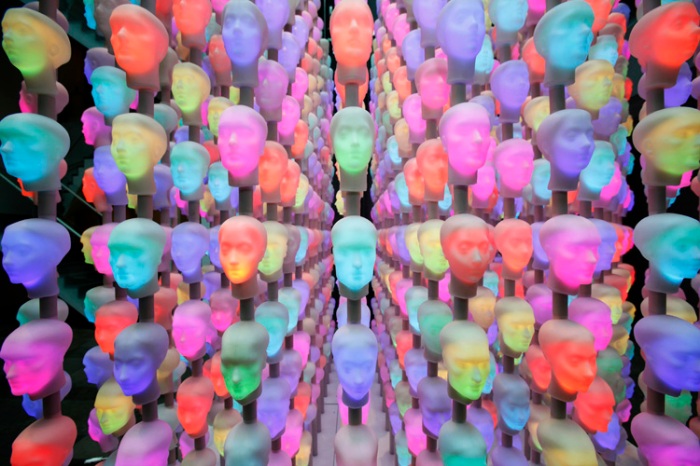 Swedish designer, Alexander Lervik, created the installation Dimensions out of 1728 heads, 35,000 parts, and 24,000 LED lamps. The cube of heads is 3-meters squared and works as a 3D screen. Originally designed for the insurance company Skandia, the light bar sculpture was displayed at this year’s Stockholm Design Week.

All images are from LervikDesign. You can see more at their site.