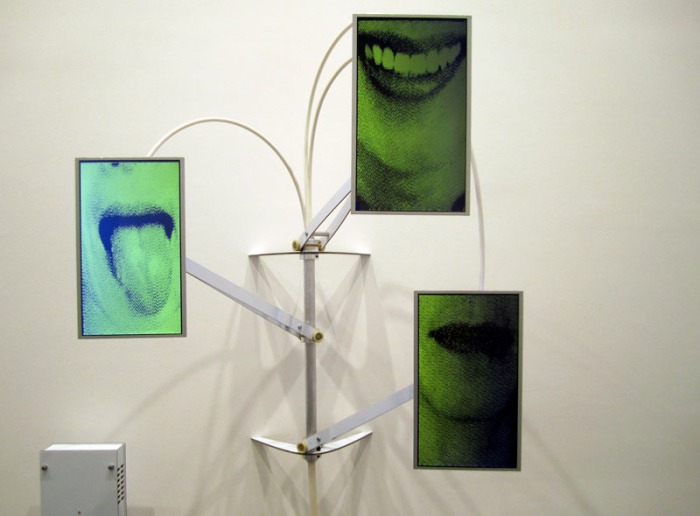 Last Saturday, while half the world was at the St. Patrick’s Day Parade and the other half was walking on the High Line (myself included), I meandered around Chelsea checking out some exhibits on a list supplied by my art-savvy friend Eric. One of these was the delightful Alan Rath show at the Bryce Wolkowitz Gallery titled Skinetics. It’s impossible not to smile at these ultra-expressive digital media sculptures. Whether it be the large eyes looking in all directions, or mouths with tongues sticking out at you, these are just a lot of fun. Greeting you in the window is the electronic pheasant-feathered piece titled Yes, Yes, Yes! doing a little dance; reminded me of a more elegant version of a venus flytrap. Leaving the gallery, I witnessed a cab driver sitting in his cab, captivated by the robotic performance, while the passengers in the back were laughing and smiling at the same spectacle. You can see it in action in the video below.

Alan Rath is based in San Francisco and originally received a BS in Electrical Engineering from MIT. He has been playfully exploring new media – as well as expression and gesture without the inclusion of speech – with his distinctive sculptural works using moving and interactive digital media since 1990. His show Skinetics includes his most recent work, mostly from 2012, and will be on exhibit through April 7th.

Top three photos and video by collabcubed; other photos courtesy the artist and Bryce Wolkowitz Gallery.